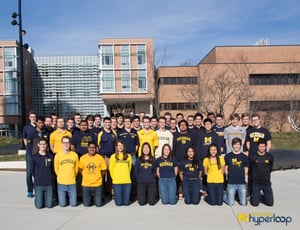 From PayPal to Tesla, space exploration to solar power, Elon Musk's ideas and innovations transform just about every industry he touches. Now, W.C. Branham is excited to help participate in Musk's next big idea, helping a team competing in the SpaceX Hyperloop Pod Competition.

In the fall, three Big Ten universities approached us with interest in our braking systems. Each team was participating in the Hyperloop Competition. Michigan Hyperloop, from the University of Michigan, was selected to race their pod this summer.

This is the second year Michigan Hyperloop is participating in the competition, but many of the 60-students on the team are new, and a large portion of them are freshmen.

"Our average team age is 19.5," says Stephanie Shantz, a junior studying mechanical engineering, and the braking system lead at Michigan Hyperloop. "Probably 30-40% of our team are freshmen."

For upperclassmen like Stephanie, it's fun to teach the younger students about the project. "It's a really cool experience for these kids," she says. "It's been a really fun year to see these kids blossom into engineers."

So, how do 60 students work on one project while juggling school, work, and other extracurricular activity schedules at the same time?

The team is divided into five subteams — brakes, structures, stability, propulsion, and controls. Each subteam is responsible for their portion of the project, but it's crucial that each part work properly with one another. So, the entire team meets for an hour on Tuesday nights to discuss their pod's progress. The leader of each subteam reports to the entire group about their progress and what their team will be working on next. On Sunday, from 1-5 p.m., the entire team meets at the library to work on their project. Every other day of the week, students find time in their busy schedules to work on their piece of the project whenever possible.

"We joke that when we procrastinate on our homework, we're working on our pod," Stephanie says.

The team also has help from two faculty advisors, a professor in aerospace, and one in mechanical engineering. They utilize many of the school's resources including the automotive lab, where they're building the pod, and they have help from a number of sponsors.

They began designing in September, presented preliminary designs in late October, did more designing and analysis through November and December, submitted a 191-page final design package in January, and learned two weeks later that they were one of 20 teams selected to compete in July at SpaceX's headquarters in California. According to SpaceX, approximately 100 teams submitted preliminary designs.

It's an opportunity of a lifetime for these students.

"It is absolutely insane that we were selected," Stephanie says. "As an engineering student, you look up to companies like SpaceX so much. It's one of the most rewarding things I've ever done."

This year's competition had a new spin on it. Instead of having a Tesla propel the pod forward, each pod needs to be self-propelled. The winner will not just be the fastest pod, but the fastest pod that successfully stops on its own. To stop a moving vehicle traveling up to 350 miles per hour or more, you need an exceptional braking system. And the brakes must be fail-safe, meaning if you lose air pressure, the pod still stops; if anything goes wrong, the pod still stops. So, Stephanie took to the internet hoping to find a solution.

"We looked at every website we could find," she says. "I think we found only one other company that makes the brake we were looking for, but it was really heavy. We already know, the lighter you are, the faster you can go. So, W.C. Branham was really the only company who offered what we needed."

While we can't give away too much of the team's design, we can say they chose to use our pneumatic spring-applied brakes.

W.C. Branham pneumatic spring-applied brakes use a series of stacked disc springs to apply braking force. The springs store energy when compressed with air pressure. When pressure is removed from the brake the springs expand to apply a positive braking force.

"We were happy to provide Michigan Hyperloop with one of our products," says W.C. Branham President Troy Branham and University of Minnesota grad "In fact, the more we learned about SpaceX's Hyperloop competition and Michigan Hyperloop, the more excited enthusiastic we became to sponsor them."

"We're excited to see what these young adults come up with," he says. "We only wish we were involved in the competition earlier."

If allowed, Branham plans to fly a few staff members to California this summer to support Michigan Hyperloop and watch the competition in person.