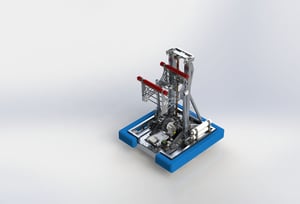 If you ever wonder about the future of engineering, just visit a high school robotics competition. Thousands of teams from around the world plan, build and compete with the remote-controlled robots that they have strategically designed to excel in that season's team challenges. The designs are complex, the competitions are intense, and we had the pleasure this season to help and watch the team from Plano, Texas in action.

It started with a Google search, and ended with a relationship we will always remember.

It All Started On Google

This year's challenge was announced in early January.  It involved picking up balls that are 13-inches in diameter and placing those balls in a goal at 3 different heights, as well as a placing 19-inch diameter flat discs that had velcro on them (and were called hatch doors) on something they called a rocket ship to hold those balls in place.

The team from Plano had six weeks to design and build their robot, and they contacted WC Branham after finding a caliper brake online.

"I filled in the quote request," says Amy Bates, the adult mentor for Team 5431 - Titan Robotics. "The students told me the parts number they wanted."

But instead of simply filling the order, Amy was surprised when WC Branham responded with a message.

"They asked, 'Is Titan Robotics a student team? If so, we might be able to help.' And they did way more than just get us a part," she says. "They got us the right part. It was a great collaboration."

She says WC Branham President Troy Branham and VP Engineering Chad Randleman worked with the students to figure out the best brake for their needs. "These kids are budding mechanical engineers. They knew what functions they needed, and Troy and Chad worked with them to know exactly what part was going to work best," she says. "They recommended the Pneumatic 47 caliper disc brake."

"It was a joy to work with Titan Robotics," says Troy Branham. "Those kids are so smart and so driven. Who wouldn't want to help them?"

Senior Katka Durcanska, who is heading to the University of Texas to study mechanical engineering, explains that the caliper was used to control the movement of the mechanical arm on the robot – a crucial mechanism for moving the balls and rocket hatch panels.

"The Double-Acting Retractable Floating Disc Brake Caliper was mounted between our two arm gearbox plates and plumbed into our pneumatic system with a working pressure of 60 PSI. Even at the low PSI, the caliper had no issues holding up our mechanism with a force of 600 inch/pounds," she says. "The disc was placed on a chain and sprocket reduction in order to increase the stopping force enacted upon the arm. This greatly helped us at our competitions as we were able to hold our arm in any given position and score in difficult places." 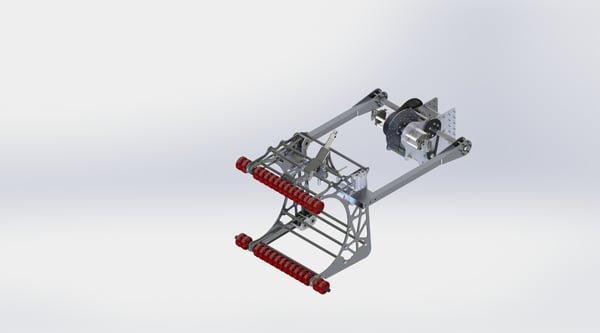 "As the arm moved up and down, that brake would stop it at exactly the right height, and it would do so predictably and reliably," says Amy.

"This was our first time using a brake caliper, so we were very excited about the opportunity," says Katya. "In fact, at our competitions, many people came up to us just to learn more about it! It really was one of the coolest features of our robot!"

Titan Robotics also qualified for the Texas State Championships and the World Championships, which caused a bit of a parts issue. They practiced so much – Amy says the kids would get up early in the morning to squeeze in extra driver practice before school – that they needed a new set of brake pads.

As you'd expect, WC Brahnam supplied them, and Titan Robotics was a quarterfinalist in its field at the World Championships (with almost 400 teams representing 80 different countries, the competition was split into six fields of 65 teams apiece).

Yet despite all of their success in those competitions, Amy is equally proud of the Chairman’s Award for Outstanding Community Service that they won at the state meet.

"These kids are really amazing at helping support the younger robotics learners throughout our community," she says. "They volunteer as referees, cue-ers and judge assistants. All told they have donated over 2,800 hours of community service since August."

"It was fun to get updated from Titan Robotics every step of the way," says Troy. "Learning that they won that community service award makes us even more proud to have worked with them this season."

[VIDEO] How to Properly Adjust a Mechanical Brake Caliper

In this video, W.C. Branham's Chad Randleman demonstrates how to make the adjustment on your m...
Read More

[VIDEO] How to Replace Friction Pads on a Caliper Disc Brake

In this video, W.C. Branham's Chad Randleman demonstrates how to replace the friction pads on your...
Read More